April 12 - Another Year in the Books

If you recall from my last update, the block went through the ice on March 29th at 12:16 p.m. Since that time, I’ve been opening envelopes, pulling out staples, then numbering and cataloguing the 967 tickets that were received for this year’s event. As a point of interest, this year’s time and date was less than 24 hours later than when the 2020 Meltdown ended last year (March 28th at 1:38 a.m.)

The winner of this year’s contest almost didn’t happen. More on that below.

Here are the details on the 2021 Meltdown:

The most popular times were:

The next most popular dates were: 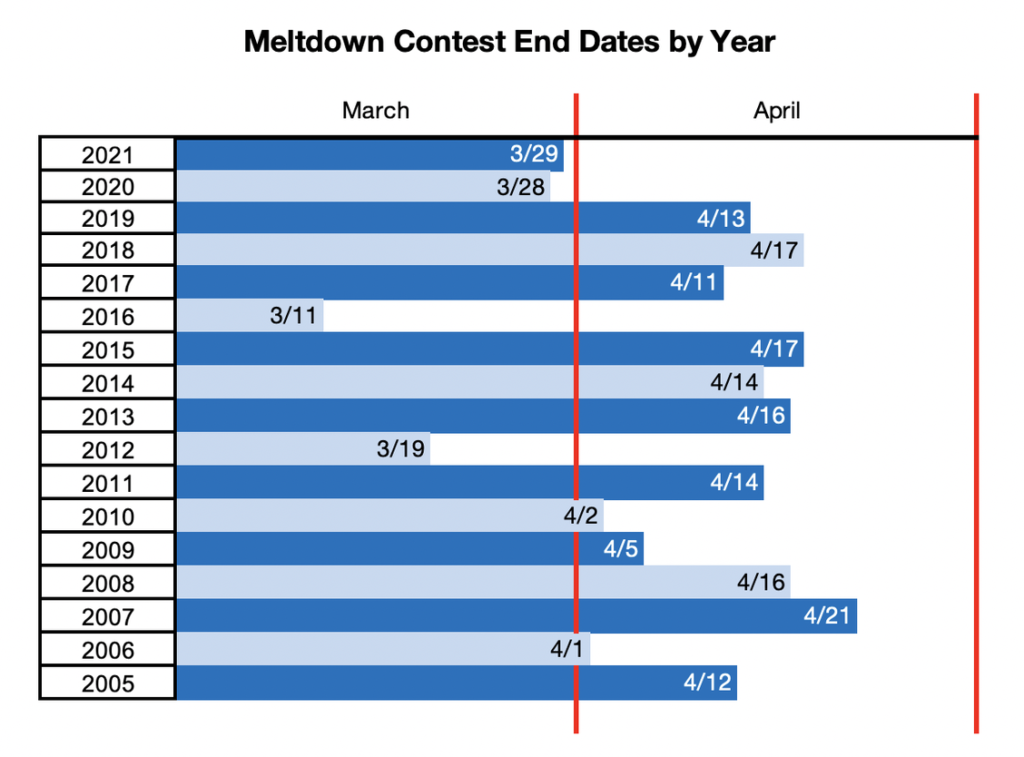 Lastly, some of you may have heard that Sue (my wife) and I have announced some big changes in our lives this year. Here’s a link to an article that appeared in the Daily Hampshire Gazette last week that will shed more light on what’s going on with us. Suffice it to say that we’re both looking forward to entering the ranks of the retired.

Based upon the number of comments I received from you, it’s clear that the Meltdown contest provides some respite and maybe even some joy from the world around us. I hope to continue to run the contest as long as I think it’s making a difference.

Until next time, thank you, stay healthy, keep your hopes up, and think summer.

High wind warnings were posted for all of Massachusetts yesterday with the heaviest winds coming before dawn into the morning hours. I went down to the water to check on the condition of the ice and the block. When I arrived, I noticed that the northwesterly winds had blown the ice floe towards the dam. As a result, there was a noticeable slack in the rope between the block and the electric clock at the gatehouse. I took up the slack and re-attached it to the extension cord and captured this time-lapse of the windy conditions at 10 a.m.. Note that a wind gust towards the end of the clip blew my phone over. Lucky for me the phone didn’t fall into the water.

I received a text from my neighbor yesterday afternoon just after 1 p.m. telling me that the flag was down. When I went to investigate, I found the block and pallet below water and only the flag showing above water.

Since there’s still a chance that people mailed in tickets over the weekend, I will provide a final 2021 Meltdown update with the name of the winner later this week. I’ll be reaching out to anyone that submitted tickets in envelopes with a 3/29 postmark offering to return their funds or taking them as a contribution to the cause.

March 27 - The View from Above

March 26 - The Winds of Change

High winds aloft can be seen in this time-lapse taken at 3 p.m. from the gatehouse at Hammond Pond. We experienced a nice taste of spring as temperatures climbed to the upper 60’s and wind gusts in the 40-50 m.p.h range.

After sending out Thursday’s 2021 Meltdown update, I took a walk down to the water because I was told there was about a foot of fog forming on the surface of Hammond Pond and that it might make for a good picture. Much to my surprise, the ‘foot of fog’ had turned into a blanket of advection fog that covered the entire water body.

Advection fog, as defined by the National Weather Service, is formed as warmer, moist air moves over a cold ground. It is more common on the west coast of the United States because of the cold temperatures of the Pacific Ocean combining with warm desert winds. If you’ve ever been to the Golden Gate Bridge in San Francisco and seen the fog roll in, you now know what it’s called. The time-lapse video below is Goshen’s version of it.

March 25 - Things Are Starting to Heat Up

As I sit here writing this update, the sun outside is shining brightly and the outdoor temperature is a balmy 61 degrees. Patchy fog this morning, especially over Hammond Pond, slowly gave way to brilliant sunshine this afternoon. Unsettled weather returns overnight and into tomorrow with thunderstorms being forecasted in the afternoon. More inclement weather and cooler temperatures are expected this weekend and into the coming week.

A reminder that ticket sales end on April 1st at 11:59 p.m. Any tickets postmarked on April 1st or sooner will be accepted. Just to be fair, any submissions received within 24 hours of the block falling through the ice will be returned.

Also, keep in mind that the contest ends when the pressure of the rope pulls the extension cord which powers the electric clock from the outlet its plugged into. In years past, the block has ‘fallen’ through the ice but the clock remained connected for several hours afterwards. 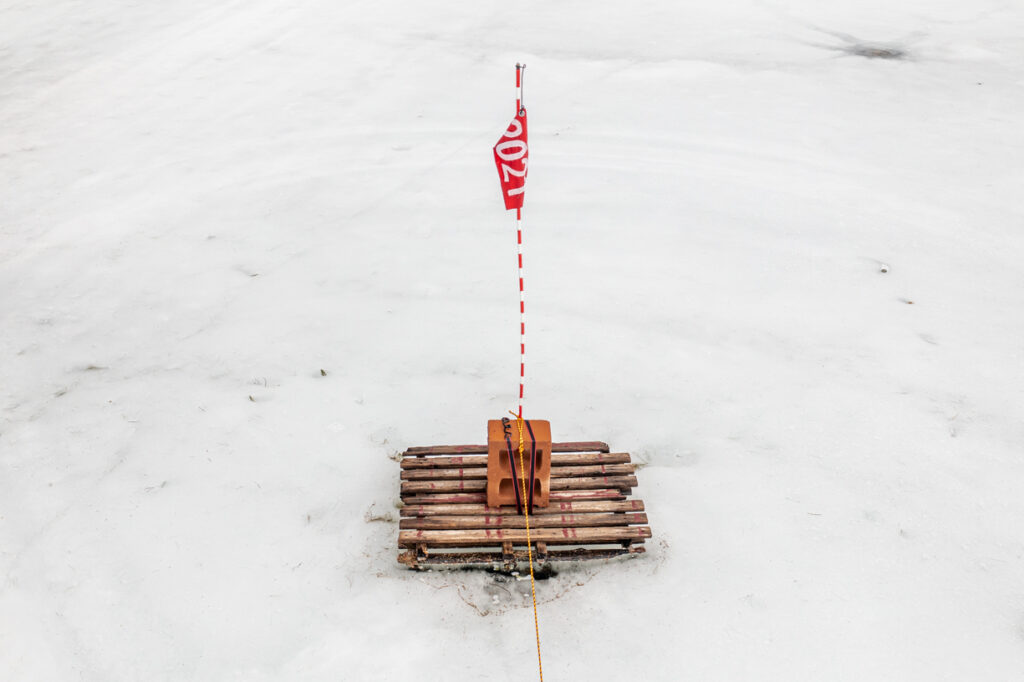 Changeable might be the best way to describe the weather over the past seven days. The week started off with daytime high temperatures in the 20’s and ended up in the 50’s yesterday and today. The only thing that’s keeping the ice on Hammond Pond are the nighttime temperatures that are well below freezing.

Three weeks ago, the ice measured 18” thick. Today, even after all the warm temperatures, the ice below the block now measures 14 1/2” thick.

As is usual around this time of year, there are winds of change in the air. The 4-day forecast calls for daytime highs in Goshen to average around 60 degrees with nighttime lows right around freezing. However, as the March sun slowly creeps higher into the sky, its impact on the ice surface is obvious. This morning when I walked on the ice, it was hard and slick. When I took the picture above late this afternoon, the surface was slushy and wet.

While the calendar shows that there are 10 days until April 1st, I feel the need to remind you that any tickets received within 24 hours of when the block actually goes down are not valid. Said another way, if you’re interested in participating in the 2021 Meltdown and support the Goshen Firefighter’s Association, it would be best if you sent in your tickets sooner than later. 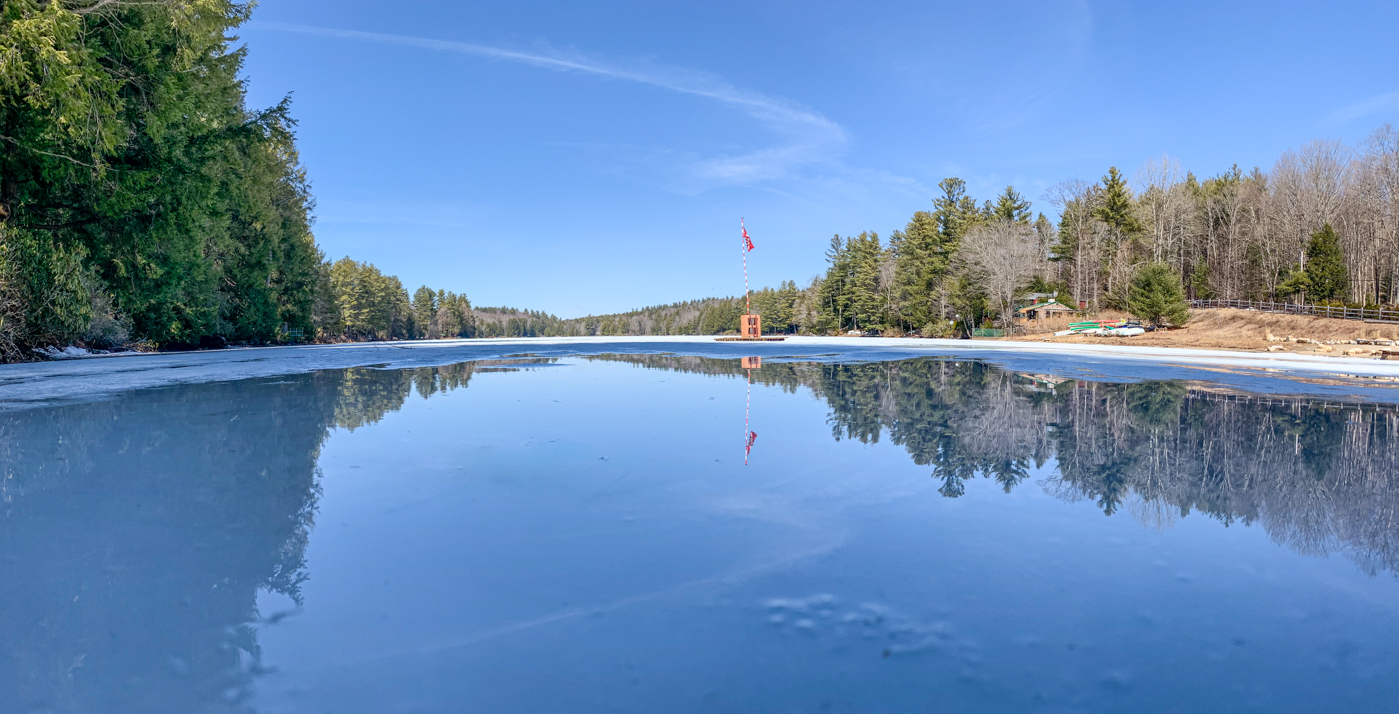 Snow squalls, wind gusts near 50 m.p.h, and chilly temperatures mark the start of the 2021 Meltdown.

Thanks to actor Bill Murray, the term Groundhog Day has come to represent a daily grind that repeats itself day after day after day. For many of us, thanks to the Covid 19 pandemic, 2020 has also been one repetitive Groundhog Day. With La Ninà firmly in place over the Pacific, most long-range forecasters are predicting an early spring in spite of Punxsutawney Phil’s prediction of 6 more weeks of winter. Regardless, the 17th annual Meltdown contest has begun.

The concrete block sit on a wooden pallet that holds a flag. The flag is simply a marker that shows where the block is in the event it gets completely covered in snow. The block is connected to an electric clock by a rope. The clock is plugged into an outlet in the gatehouse on the dam holding back Hammond Pond. Once the blocks fall through the ice or the ice floe moves away from the dam, the tension on the cord will pull the plug out of the wall socket and stop the clock. Simple, right?

The benefactor of this year’s fundraising efforts will be the Goshen Firefighters Association (GFA). The GFA is a registered 501(c)3 non-profit organization that supports the delivery of fire and emergency services to the Town of Goshen and other communities in our region. As a result of the pandemic, the GFA’s largest fundraiser on Columbus Day weekend was canceled. Your participation in this year’s event will help them bridge the gap until such time that life returns to normal.

Here are some statistics from the past 16 years of Meltdown events to consider as you make your selections:

As you can see from the table below, the block has gone as early as March 11th (2016) and as late as April 21st (2007). The official endings of the previous contests were as follows:

Follow along as I send a camera into a hole that was cut into the ice on Hammond Pond by the Goshen fire department for their annual ice water rescue drill.  The ice measured 18″ thick on February 28th, 2021.

This is what 18” of ice looks like from beneath the surface.