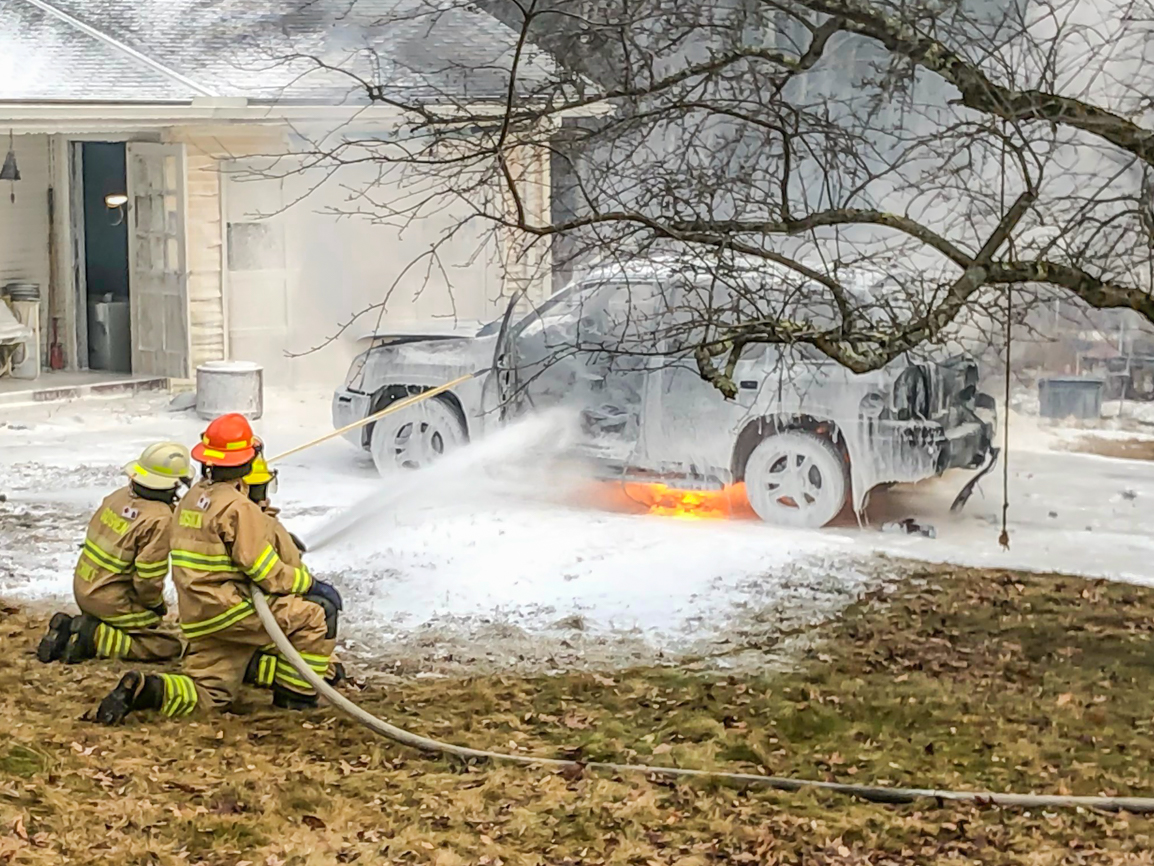 GOSHEN, MA – When the tones go out for a daytime call in the hilltowns across western MA, emergency coverage can be hit or miss depending on who’s available to respond.

On Tuesday afternoon at 2:55PM, Goshen firefighters were dispatched to 101 South Chesterfield Road for a car fire.

Bill Connell, who lives directly across the street from the call, was the first to respond.  Bill works the overnight shift at Yankee Candle. Being the first eyes on scene, he was able to confirm to dispatch that the 2004 GMC Envoy was fully involved and was dangerously close to the home.

Monica Neveu, a physical therapist, had just returned home from work.  She headed to the station to get Engine 2 and responded to the scene with a trio of junior firefighters.  Monica’s two sons, Adrian and Dillon, along with Michaela Rock, were available because they had just gotten home from school.

When Engine 2 arrived on scene, crews pulled a trash line from the truck and made their initial attack on the car.  A second line was dedicated to protecting the house exposure since heat from the fire had already started melting its siding.

Chesterfield’s Town Administrator Sue Labrie responded to the station from her office in Chesterfield and was met there by Kim Dresser who recently retired from his job at the VA Medical Center in Leeds and River Williams, a student at UMass who was home on winter break.  Together, they responded with Engine 7.

When they arrived on scene, a 4″ hose was connected to Engine 2 for water supply.  They were helped by Dan Routhier, from DLC Repair, a passerby who just happens to be the mechanic that we rely on to repair department apparatus.

Cam Lacey was on his way home from his job on the Cummington Highway Department and took over as pump operator when he arrived on scene.

Mutual aid from the Williamsburg fire department was requested to supplement our water supply.

As a all-volunteer department, there were no firefighters at the station when the initial call came in.  However, the combination of pagers and portable radios notified department personnel of the emergency.