Click on any image below to launch the photo viewer.

Soaking rains and record warmth combined for a one-two punch that spelled the end of the 2017 Meltdown.  The end came at 5:07PM after a sun drenched day that found temperatures soaring to near 80 degrees.

A total of 1,302 tickets were sold.  Guesses were submitted by over 300 people from 60 cities and towns in 10 countries which included Australia, Bolivia, Colombia, Cuba, England, Ireland, New Zealand, Poland, Taiwan and the United States.
The most popular date for this years contest was April 2nd with 56 guesses followed closely by April 3, April 1 and April 15 with 54, 52 and 51 guesses respectively.
An unseasonably warm February led most of you to pick early dates since almost 2/3rds of the picks had already gone by when the block sank.
In addition to the tickets sold, we also received $689 in straight donations towards the purchase of the new defibrillator unit for our elementary school.  The largest gift was a $500 contribution received from the Thomas Bisbee Memorial Fund.  “T”, as he was called, lived in Goshen all his life and was known to many of us throughout the community.  He passed away from sudden cardiac arrest this past September at the age of 17.  Combined with ticket sales, the New Hingham Regional Elementary School Defibrillator Fund will receive a check for over $1,350.  Matching contributions from both the Chesterfield and Goshen Firefighters Associations will ensure that the school bears no cost towards the purchase of the unit.
Sometime after noon yesterday, the block went through the ice.  However, it didn’t sink far enough to stop the clock.  When I checked it again before dinner, the clock was on the ground in the gatehouse.  The only thing that had stopped it from being in the water was the knot used to tie it to the rope connected to the block.
When I checked the database of tickets to see who had won, I smiled.  With a nod towards things that make you think other powers were at play here, the winner of the 2017 Meltdown is Evelyn Culver.  You see, Evelyn is T’s grandmother.  Her winning guess of 4:46PM on 4/11 was the closest to the actual time the clock stopped without going over and will net her a check for $613.45.
Once again, my sincerest thanks to those of you continue to support, encourage and contribute to our annual Hilltown tradition.  In the end, your actions contribute towards making a difference in our community.  For that, I am most appreciative.

Patchy rain and thunderstorms.  Mostly sunny.  A chance of snow before noon.  Rain and snow likely before 4AM.  Freezing rain then sleet before 9AM then rain.

With these types of forecasts over the next 5 days, winter is having trouble releasing its grip on the 2017 Meltdown.  Even though we’ve had some snow over the past week, bright sunshine coupled with warming temperatures and several rain events has melted most of the snow from the last big storm.  Puddles are now starting to appear on the surface of Hammond Pond.  While I still haven’t connected the clock to the rope yet, it’s clear that the melting has begun.
We received some great news this week.  As you know, proceeds from this years contest will go towards the purchase of a new defibrillator for our local elementary school.  As a sign of true community spirit, the Chesterfield Firefighters Association is joining with the Goshen Firefighters Association to cover any additional costs associated with the purchase of that device.  As a result, proceeds from our contest combined with the contributions of these two great organizations means that New Hingham will be receiving a new AED at no expense.
With only five days left to purchase tickets, returns are going strong.  Ticket sales end this coming Saturday (April 1st) at midnight.  Tickets that are mailed in will be accepted as long as the envelope is postmarked with Saturday’s date or sooner.

The vernal equinox, which represents the exact moment that the sun is directly over the equator, arrived this morning at exactly 6:29AM.  What does that mean to the Meltdown contest?  Nothing other than to say that spring has officially arrived.  However, it’s clear that winter still has its grip on Hammond Pond.

Last Tuesday, we were clobbered with 16″ of snow followed by a day of high winds which contributed to lots of blowing and drifting snow.  The only open water on the pond is where Webster Brook comes in at the northern end of the pond and near the spillway at the dam.  Everything in between is snow covered ice that stretches from shore to shore.  You can tell that the sun is getting stronger because half of the snow that fell on Hammond Pond last week has melted.  The constant freeze / thaw pattern is currently contributing to the thickness of the ice.

There are no storms forecast over the next two days but there will be quite a difference in the temperature department.  Tomorrow’s highs are forecasted to be in the 50’s but an arctic blast will usher in much colder and windy weather on Wednesday when we will struggle to get out of the 20’s.  With a blanket of snow now covering and insulating the ice shelf below it, I’m not certain what impact single digit temperatures Wednesday night will have on the ice.

The 10-day forecast is shaping up to be a maple sugarer’s dream with daytime highs in the 30’s and 40’s and nighttime lows below freezing.
There’s been an uptick in the number of tickets that have been submitted to date.  We received an update from the students at Monument Mountain Regional High School in Great Barrington where they have a poster in their classroom showing everyone’s picks. Surprisingly, guesses associated with dates that have already passed are being crossed off the list.  Clearly, some students haven’t done their homework if they picked dates in March. 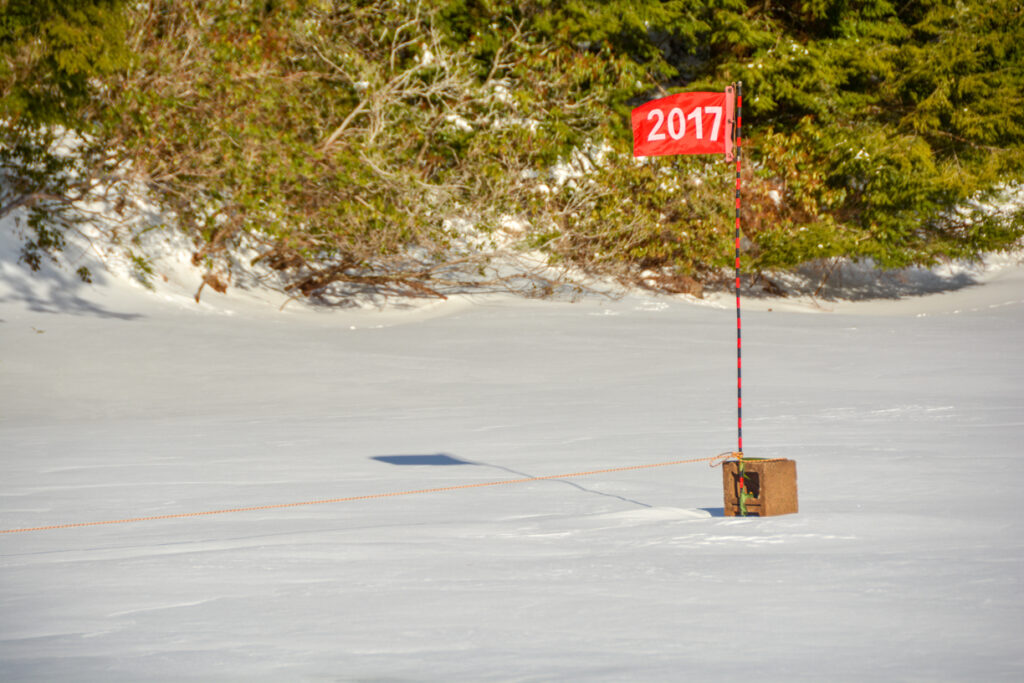 A lot has happened since my last update.

Temperatures soared into the 60’s in late February for an extended period of time making me start to think that the Meltdown was doomed to end early for the second year in a row.

Mother Nature reminded us who was boss when she brought in a cold front on February 25th that made history.  Not only was there a tornado that touched down in Goshen, it was the first tornado ever recorded in the month of February in the State of Massachusetts.  Many parts of town were without power for almost 24 hours.  The storm caused significant pockets of damage throughout town including here at Hammond Pond.  Three cottages were damaged by falling trees.  Two of them significantly.  Elsewhere, trees were toppled from both straight line and tornadic winds.

Then came the cold.  Temperatures dropped to the single digits for several nights in a row.  Several days of strong winds in the 40-50 MPH range brought down the trees that were weakened by the earlier wind event.

Over that same period, the Goshen fire department was called in to assist in the retrieval of a dune buggy that had fallen through the ice on Lower Highland Lake in the center of town.  Two weeks ago, the ice there measured 6” thick when the ice on Hammond Pond measured 16” thick.

Even though we are now in what is referred to as the meteorological spring, a late winter nor’easter has it’s sights on our region.  The entire state with the exception of the Cape and the Islands is expecting to get 12” – 18” of snow on Tuesday.

When I went to measure the ice today, my 18” drill bit couldn’t get through to water.  So, it’s safe to say that the ice near the block is over a foot and a half thick.

Ticket receipts have started to come in at the same time I’m trying to get the word out on the contest.

Since Punxsutawney Phil saw his shadow this year (which means that there’s still 6 weeks of winter ahead of us), it’s time to get the 12th annual Meltdown under way.

As you all know, the block sits on a wooden pallet that holds a flag.  The flag is simply a marker that shows where the block is in the event it gets completely covered in snow.  The block is connected to an electric clock by a rope.  The clock is plugged into an outlet in the gatehouse on the dam holding back Hammond Pond.  Once the block falls through the ice or the ice floe moves away from the dam, the tension on the cord will pull the plug out of the wall socket and stop the clock.  It’s that straightforward.

This year’s fundraiser will go towards the purchase of a new automated external defibrillator (AED) for the New Hingham Regional Elementary School in Chesterfield. The school, which teaches kids from pre-Kindergarten to 6th grade, already has one AED that was donated to them by the Chesterfield Fire Department. State officials are now requiring a second AED that will available at school-sponsored events including field trips.  With your help, we’ll take care of that mandate.

The deadline for ticket submissions is Saturday, April 1st.  Last year, the contest ended on March 11th.  Back in 2012, the block fell through the ice on March 19th – almost two weeks before the deadline.  While I can only do so much to regulate the impact climate change is having on our contest, what I can say is that ice has been on Hammond Pond this winter season since just after Thanksgiving.  As of last Tuesday, the ice was 18″ thick.  Tickets received after April 1st (unless they were postmarked on or before that date) will be returned.  This date is weather dependent and will be irrelevant if the block falls through the ice before the deadline.

Here are some statistics from the past 11 years of Meltdown events to consider as you make your selections:

The official ends of the previous contests were as follows:

Other significant dates to consider are as follows:

4/10 at   1:05PM – First pitch on Opening Day at Yankee Stadium against the Tampa Bay Rays

4/03 at   2:05PM – First pitch on Opening Day at Fenway Park against the Pittsburgh Pirates