welcomes you to the Meltdown Page 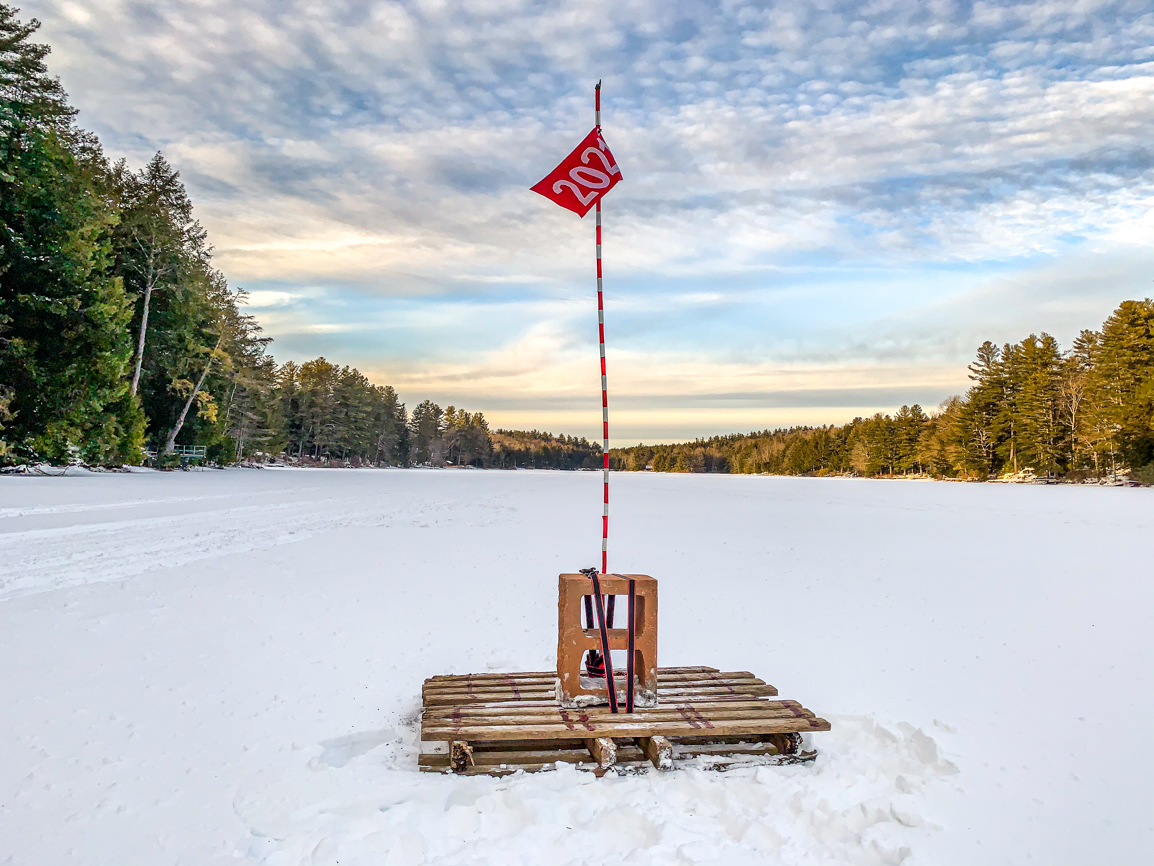 Click on the year below to see contest updates for that period.

Thanks to actor Bill Murray, the term Groundhog Day has come to represent a daily grind that repeats itself day after day after day.  For many of us, thanks to the Covid 19 pandemic, 2020 has also been one repetitive Groundhog Day.  With La Ninà firmly in place over the Pacific, most long-range forecasters are predicting an early spring in spite of Punxsutawney Phil’s prediction of 6 more weeks of winter.  Regardless, the 17th annual Meltdown contest has begun.

The concrete blocks sit on a wooden pallet that holds a flag.  The flag is simply a marker that shows where the blocks are in the event they get completely covered in snow.  The blocks are connected to an electric clock by a rope.  The clock is plugged into an outlet in the gatehouse on the dam holding back Hammond Pond.  Once the blocks fall through the ice or the ice floe moves away from the dam, the tension on the cord will pull the plug out of the wall socket and stop the clock.  Simple, right?

The benefactor of this year’s fundraising efforts will be the Goshen Firefighters Association (GFA).  The GFA is a registered 501(c)3 non-profit organization that supports the delivery of fire and emergency services to the Town of Goshen and other communities in our region.  As a result of the pandemic, the GFA’s largest fundraiser on Columbus Day weekend was canceled.  Your participation in this year’s event will help them bridge the gap until such time that life returns to normal.

Regular updates are posted here and on the Meltdown Facebook page.  Additional tickets can also be downloaded from this site using the link above.  Participants that include an e-mail address on their ticket stub will be added to a private e-mail distribution list that is used to provide periodic updates and snapshots of the block.  The current list includes several hundred addresses of people who are regularly entertained by these updates.  The sooner your tickets are returned, the sooner you can become part of that exclusive group.

Here are some statistics from the past 16 years of Meltdown events to consider as you make your selections:

As you can see from the table below, the block has gone as early as March 11th (2016) and as late as April 21st (2007). The official endings of the previous contests were as follows:

Click on the flags for the answers to your questions.

Who do I make checks payable to?

Checks should be made payable to the Hammond Acres Club, Inc.

Where should my ticket stubs and payment be mailed?

Ticket stubs and payment should be mailed to:

Who will benefit from the 2021 Meltdown?

The Goshen Firefighters Association to support the delivery of fire and emergency services to the Town of Goshen and other surrounding communities in our region.

What's the deadline for submitting tickets?

What's the deadline for submitting tickets?

Here is our binge-worthy library of videos taken over the years of the Meltdown Contest.

2019 – This time-lapse video captures 11 hours of activity on Saturday, April 13th from 8:30AM to 7:30 PM and shows the impact Mother Nature can have on the ice floe on Hammond Pond.  As you watch the video, pay close attention to the crack in the ice along the shoreline on the left.  It’s amazing to see the impact wind has on the surface of the ice – something our eyes can’t perceive because it happens in slow motion.  Condensing 11 hours of video into 3 1/2 minutes brings the ice floe to life.

2016 – The above is a time lapse video of clouds streaming over Hammond Pond in Goshen one day before the ice finally gave out and ended the 2016 Meltdown contest.

That was the challenge that was issued.  1,752 tickets were sold.  Steve and I went for a swim.

2014 – I spent some time on the ice on Sunday with fellow Goshen firefighters Jake Lulek and Dan Daley.  We drilled a few holes in the ice with an auger so I could measure its depth.

2011 – Todd Haskell and I ventured out onto the ice with his auger to determine its thickness.