Drones and Heart Assist in Successful Search and Rescue 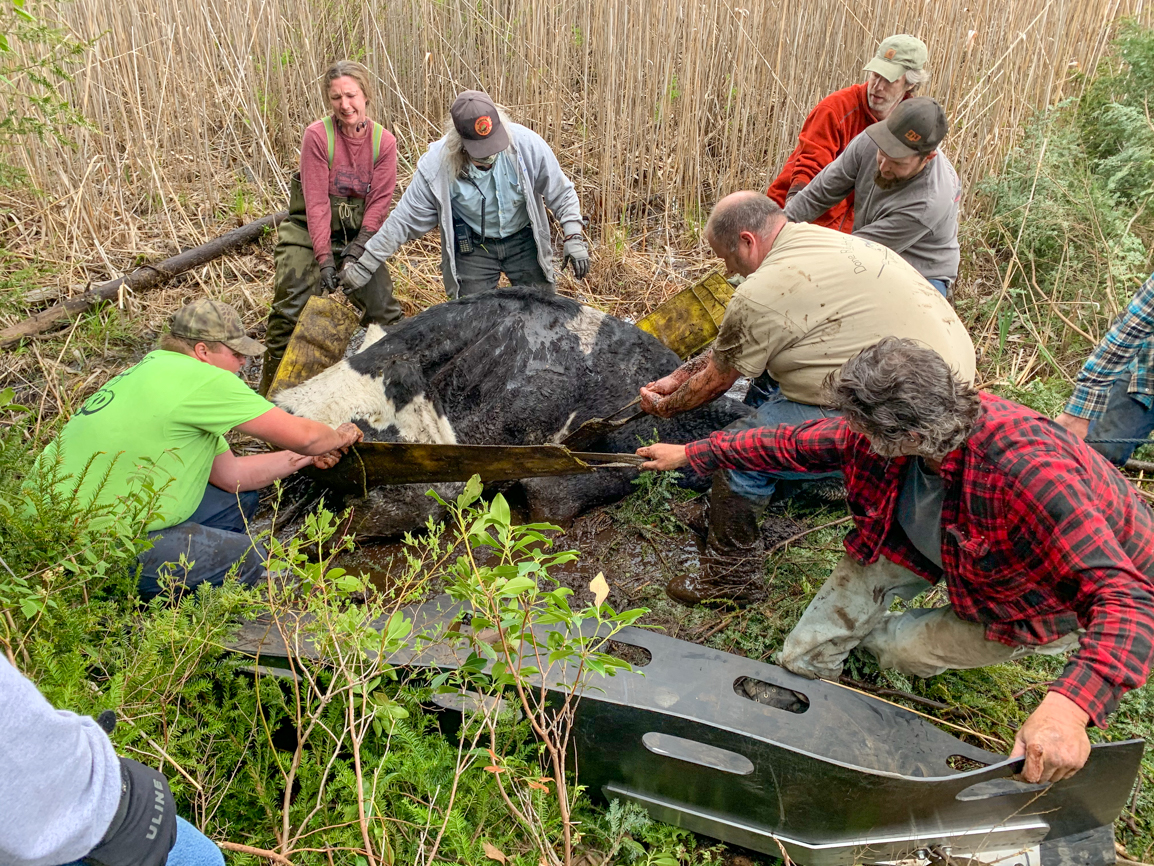 Their names were Mary and Bella and they were missing in the woods of Goshen.

GOSHEN – It all started with a social media post late Sunday night on the Goshen Gathers Facebook page by Goshen resident Christina Griffin that read in part “Our neighbor on Dresser Hill rd is still missing 2 black & white cows.”

Goshen Fire Department Captain Bob Labrie and Firefighter Francis Dunham, both drone operators, decided to put their flight skills to the test and conduct a search for the animals.  They agreed to meet at the fields on the end of Dresser Hill Road at noon on Monday with Steve Smith, the owner of the missing animals. The area at the end of Dresser Hill Road consists of several large grassy fields which are surrounded by hundreds of acres of forest.

Prior to the flight, Steve explained that he had been looking for the missing Holstein cows since yesterday.  He also mentioned that there were several reports from the neighbors on the street of a bear that had been seen in the area the day before which may have spooked the animals causing them to leave their enclosure.

When asked where he thought the animals might be found, Steve didn’t hesitate and said “Near water”.  Bob was familiar with the area because he frequently flies his drone there to capture images of the sunrise.  He knew there was a sizable wetland to the east of the fields.  Together, he and Francis flew their drones in that direction.  Once over the wetland, they coordinated their efforts – Francis searched the eastern side of the wetland, Bob the western side.  In less than 2 minutes, the cows were located approximately 1,100 feet from the field we were standing in.

From the air, it appeared that the cows were simply laying down in the tall grass.  However, after trekking through the woods to retrieve them, it was obvious when we got there that they were stuck deep in the mud.  Another complicating factor was that the animals were at the bottom of steep 30′ embankment with protruding rocks.

It was clear that additional resources were needed if the animals were to survive.

Bob reached out to Deputy Chief Kim Dresser to make him aware of the situation.  Kim then reached out to Robin Brown for help.  Robin is a Williamsburg firefighter, horse owner, and someone we’ve called on before for large animal rescue advice.  Bob then contacted Northampton control and worked with Dispatcher Lisa Carroll to tone out Goshen and Williamsburg firefighters.

The initial Goshen tones were sent out at 1254 hours.  Williamsburg was called in for additional resources shortly thereafter.  Goshen’s Brush 1, our ATV/Rescue trailer, and Williamsburg’s Engine 3 responded to the scene.  Cummington Fire was put on standby for Goshen fire in the event other emergency calls came in while rescue operations were underway.

Steve Smith, the owner of the animals, called in a friend to operate a logging skidder that was on the property.  Once gathered in the staging area, teams made their way through the woods to the animals.

After an initial assessment, a request was sent to the Westhampton Fire Department to respond with their large animal rescue equipment.  This consists of several slings, a customized sled and other specialized gear that would be needed.

Williamsburg Fire Captain Alex Kassell provided logistical support at the staging area in the field and coordinated the delivery of equipment and supplies to the scene.

Trees and small brush were cleared across the embankment to make a path that the animals would be pulled up on.

Bella was first to be rescued since she was closest to the shore.  Straps were worked underneath her so she could be rolled onto the sled.  Once there, life safety ropes were used to pull the sled up the hillside with the logging skidder.  Firefighters were positioned on each side of her along with lots of ropes secured to trees to ensure that she didn’t slide off the sled.  Spotters along the escape route were used to relay instructions to the skidder operator who couldn’t see down the embankment from his location.

After firefighters dragged Bella approximately 70′ up the hill, they removed the sled she was laying on and encouraged her to stand up.  A round of applause erupted from the rescuers once she did.

After Steve led Bella back to the pasture, our attention was then focused on Mary.  She was further away from the shore and had been struggling to get herself unstuck throughout the time we were dealing with Bella.

Firefighters and other helpers applied the same technique on Mary.  Since the path had been cleared and the ropes already in place, Mary’s rescue went much quicker.

Much like Bella, Mary sprung to her feet after she was pulled to the top of the ledge.

Once our equipment was hauled back to the field, it was cleaned, sorted and returned to the right department.

It is often said that no one firefighter knows everything but as a group there’s not much we can’t do.  Today’s rescue, once again, proves that point.

Their names were Mary and Bella.  Thanks to the efforts of 22 firefighters, a half dozen concerned people and just over 5 hours of their time, these two cows will continue to graze in the highlands of Goshen.